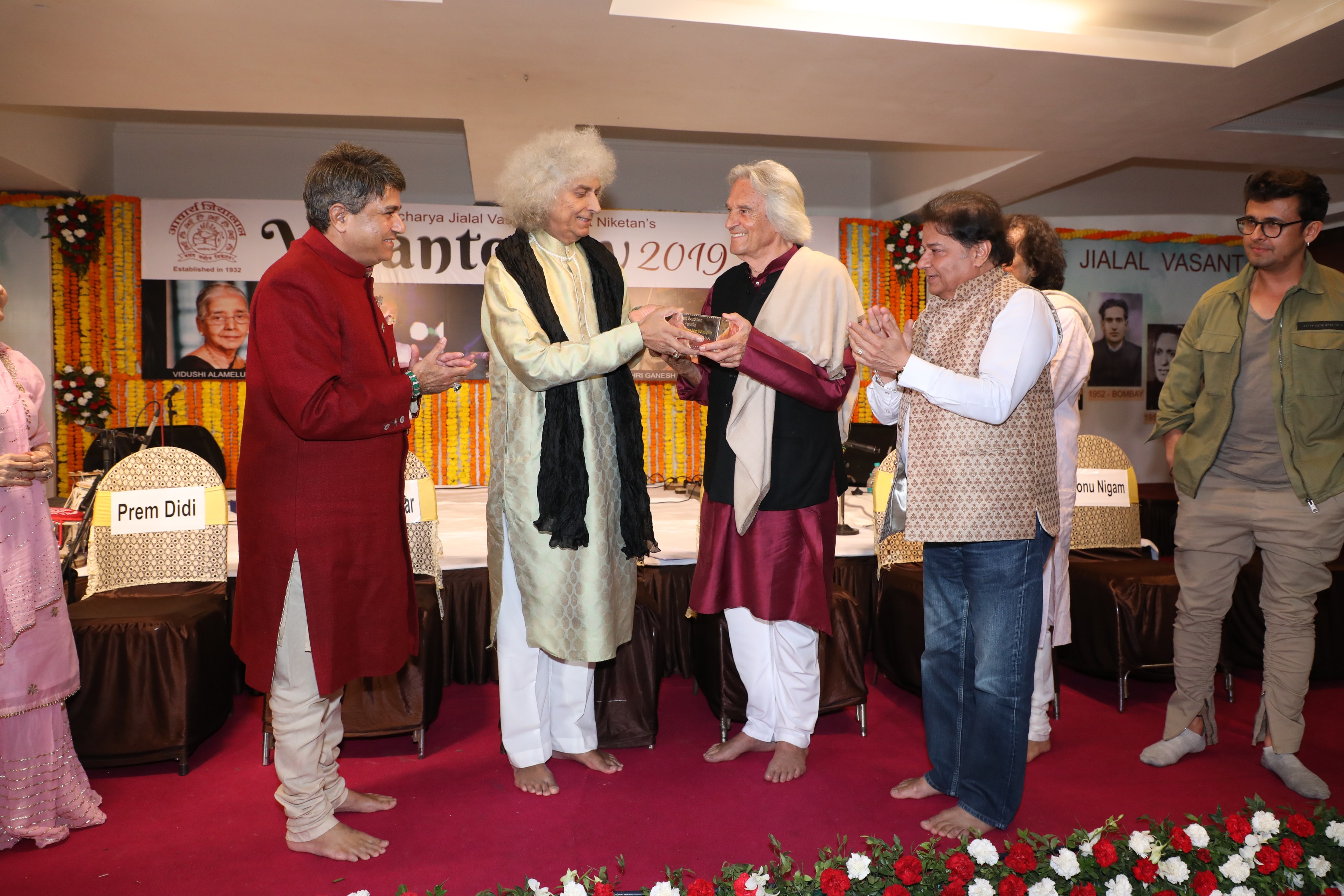 26th Feb’2019- The most awaited evening, a presentation by music maestros saw students and music lovers of Mumbai mesmerised at Ajivasan Music Academy, Juhu. Uttam Vag-Gayekar Jialal Award 2019 was presented to John MacLaughlin by the hands of santoor player Shivkumar Sharma along with Suresh Wadkar, Founder, Ajivasan, Ustad Zakhir Hussain and Sonu Nigam to name a few. John is an English guitarist, bandleader and composer. His music includes many genres of jazz which he coupled with elements of rock, Indian classical music, Western classical music, flamenco and blues to become one of the pioneering figures in fusion. The award was announced during Vasantotsav a yearly fund-raising music program.

“Ajivasan celebrates a journey of a musician every year and appreciates their effort to create some extraordinary music without stopping”, said Suresh Wadkar, Founder, AJIVASAN. “From traditional to avant garde and every music genre in between, now in its 19th year Uttam Vag-Gayekar Jialal Vasant award applauds musicians and talent globally for their musical contributions”, Wadkar added.

Ajivasan; earlier known as Vasant Sangeet Vidyalaya was founded in 1932 in Srinagar by Acharya Jialal Vasant (Guruji) under the patronage of Smt. Rameshwari Nehru. With about twenty-five students under his tutelage, Guruji started out on the musical journey of Sangeet Sadhana. The iinstitute has a reputation of providing scientific training in Hindustani Classical Music, and the students had the opportunity to perform with the master himself on several occasions.After his demise, his daughter Prem Vasant, along with disciple Suresh Wadkar, decided to fulfil Guruji’s dream of establishing a Gurukul, a place where the music aspirants get the benefit of residing and learning music. Thus, was born Suresh Wadkar’s Ajivasan Music Academy (the term Ajivasan was coined from ACHARYA JIALAL VASANT SANGEET NIKETAN in fond memory of Guruji).The Niketan is the result of a Guru with a vision and passion for turning the heart of the world towards the universality and magnanimity of Indian Classical Music.