BENGALURU: Criticising the BJP has proven expensive for award-winning actor Prakash Rai. He said the Hindi film industry has stopped offering him roles after he started questioning Prime Minister Narendra Modi.
Prakash Raj said those who support “killers” cannot be called Hindus, referring to when he asked PM Narendra Modi to speak out after his supporters celebrated the murder of journalist Gauri Lankesh.
Bollywood Director and Social Activist Shadab Siddiqui came in support of actor Prakash Raj along with his team of Social Activist on social media using #ISupportAjazKhan on Twitter.
Tweet Link: https://twitter.com/Shadabofficial/status/993080240959242242
The tweet said, “Dear Mr Prime Minister of our country, we voted for you and we have the rights to ask you questions about things that matter to us. #ISupportPrakashRaj and his questions as an Indian to his very own PM”
Looking at this post many more actors and activist came in support of Prakash Raj including Bigg Boss fame Ajaz Khan, Gurpreet Kaur Chadha, Media Tribe founder Sunil Gupta Etc.
https://twitter.com/AjazkhanActor/status/993088104171950081
https://twitter.com/GurpreetKChadha/status/993167296246919169
https://twitter.com/HeySunilGupta/status/993101634749087744
Shadab said, “I am a director and I am digitally connected to 1000 people across the country. My team and I support and back every such Individual who speak up against and combat injustice.” 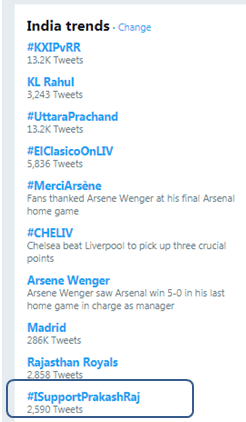