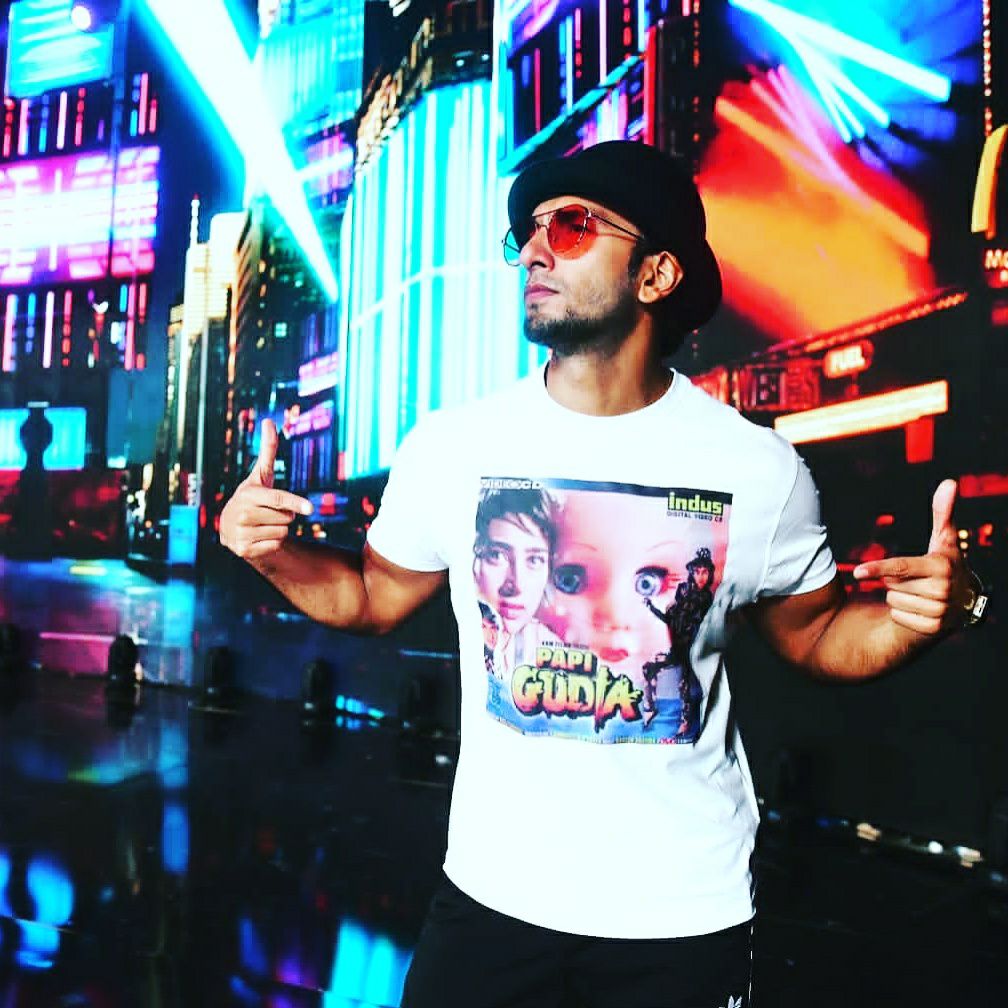 As known to everyone Ranveer Singh is someone who experiments so much be it his hairstyle or the dressing and the way he carries it all has made him what he is. He is a person with such a unique personality and sense of style. This fellow is goals in every aspect. On the day of 63rd film fare award night, he appeared with a Papi Gudia tee shirt.

PapiGudia is a horror film that released in the year 1996 was the talk of the town then and was one of the blockbusters. This film stares Karishma Kapoor opposite AvinashWadhavan was produced by Vinod Chhabra. This film revolves around crime, theft, ghost and black magic and goes as the doll that is cursed gets stuck to the hero and ends where the hero is in a dilemma without knowing what to choose. Is it murder or law. And this film was one of the hits during the yesteryears. This film was directed by Lawerence D’Souza.

This started when Ranveer Singh posted a picture on his social media before he was going to perform live on the 63rd film fare award night. He claimed that this picture and that tee was a tribute to his favourite film PapiGudia, Karishma Kapoor and team. This picture soon went viral on the internet and was the talk of everyone in town. Well, this picture soon reached Karishma Kapoor and she claims to be overwhelmed by this sweet gesture by Ranveer as the tee shirt was like a “blast from the past” and she was so moved by this. In fact, she asked Ranveer Singh for the t-shirt herself. This left Karishma stunned and she also reposted the picture saying it was hilarious and hashtagged it saying retro vibes.

This popular horror film of the yesteryears was produced by Vinod Chhabra and this is very evidently his proud moment. He owns Ranveer’s thunder with so much pride by reposting it on his social media sites saying he had to copy that tee shirt and hashtagged it saying throwback. Indeed, I’m sure that this was one of the best throwbacks a filmmaker would want. And something like this after nearly 12 years, is where real success and the craftsmanship of the film prevails. He also told that this was a very cute gesture from Ranveer and that he had never expected something like this. And this is why Vinod Chhabra remains a legend and his films have a great impact.

How much we wish made films now. If I had a superpower I’d try and time travel to the 90’s all again and enjoy all the good films and the best of filmmaking. Indeed the B-town is so proud and overwhelmed to have him. This moment was not a tribute to the film and him but also to all the 90’s kids.